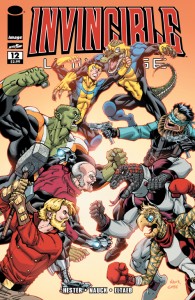 Invincible Universe 12 is on sale today.
Unfortunately, it is the last issue of Invincible Universe. I’ve had a great time working with Phil Hester, Sean Mackiewicz, Rus Wooten, Gabe Eltaeb, Andy Troy, John Rauch, Sina Grace, and of course, creator Robert Kirkman, along with the rest of the amazing Skybound crew. I have been reading Invincible since issue #1, so when Robert invited me to draw this companion series (originally entitled Guarding the Globe Vol 2), it was an easy decision to make!

This series has been a lot of fun to draw and I learned how to pencil/ink a series on a monthly basis.
I definitely have enjoyed the 2 years I got to work with these characters and contribute to Robert’s superhero universe. And even though, Invincible Universe has come to an end (at least for the time being), I’m still considered a part of the Skybound family and appreciate all the friends I have made there! 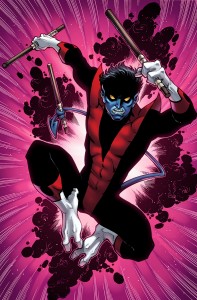 As one story ended, another began.
I recieved a call from Marvel asking if I was available for a new project and interested in drawing a new X-Men spin-off series. Having read X-Men since I was 13 years old, I of course said “Yes!”. I started to work on a new Nightcrawler solo series written by legendary X-Men writer, Chris Claremont. I started reading Uncanny X-Men during the Claremont years and Nightcrawler has been a longtime favorite X-Men of mine. So this series is a dream-come-true project for me.
Nightcrawler #1 is on sale next Wednesday, April 9th.